Your initial thoughts no doubt are that this headline is far fetched, a deviation from the truth, but it’s not. Let me explain, right from the beginning.

During this two week tour they stumbled across a heady mix of characters and happened upon some real gems. On day six they met a fella with a road bike shop. The shop was filled with the usual suspects, carbon Pinarello’s, blingin’ De Rosa’s, Colnago’s dripping in Campag. Across the sea of modernity Rob spotted a lone steel steed, she glistened and shined and she said to Rob, ‘I need you, help’ (I think he made this bit up). Rob kept his cool and got his negotiators head on ‘how much, I will give you whatever you want, just let me have her’ he screeched.

The Italian shop owner was pleased with Rob’s outburst, but not because he was greedy, no, he was pleased because he had been reluctant to let her go to the wrong person and he had waited eagerly for someone to come to the shop who would love her as he had, who would give her the life she deserved. Rob, Frankie Ciao Ciao and Frankie Ciao Ciao’s dad wrapped the beautiful Cucchietti in a blanket and lay her in the back of the van.

It was a regular kind of day, Rob was busy fixing stuff, Cassius was stood at the door frightening passers by and Frankie Ciao Ciao was in the basement doing something (we can’t remember what) and in strolled Stu. Stu Bowers to be precise. This Stu fella was after a bike to ride L’Eroica on. As it transpired Stu was a bit of face on the mountain bike scene and a pretty accomplished rider; Rob figured this would stand him in good stead for a race like L’Eroica, because even though it’s a road race on classic bikes and it’s nothing like mountain biking, it famously takes in strade bianche. For those who don’t know strade biancha is a ‘white’ road filled with tiny stones and is reputedly very difficult to ride on, even the most experienced of road riders struggle on the terrain.

A lightbulb appeared above Rob’s head (again I think Rob made this bit up), Stu should ride the Cucchietti, take her back to her rightful home, give her the outing she had been waiting for. And that was that, Rob would restore the bike, get her back up to speed and Stu would take her to Italy. 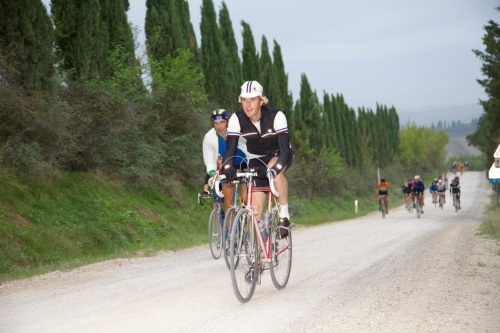 Go on Stu, you show’em lad

Stu returned to blighty victorious, he had secured the fastest time of the 2012 L’Eroica, covering the 205km in a tad over eight hours; this is a superb time for such a gruelling race. And so we have it, the Cucchietti was rode to glory on her home turf. I suppose you could argue that it was Stu and the bike that won the competition not Sargent and Co, but we like to think that everyone in the tale had a part to play in the hunt for glory.

In November 2012 the Cucchietti came back to Sargent and Co and is now on sale.
Champion Stu Bowers has continued to ride bikes and works as the Deputy Editor of The Cyclist Mag
Rob Sargent continues his quest to return classic bikes to their former glory.
Frankie Ciao Ciao came out of the basement and was never seen again.

Posted in Customers and their bikes, For Sale, Italian Bikes and Parts